(Note: The following opinion piece first appeared on The Daily Call, February 23, 2016. Richard Drake is the author of the UW Press book The Education of an Anti-Imperialist: Robert La Follette and U.S. Expansion.)

By Richard Drake
Special to the Daily Call

On 4 April 1917, Senator Robert La Follette of Wisconsin rose in the Senate to speak in opposition to Woodrow Wilson’s call for war against Germany, a message delivered by the President to a joint session of Congress two days earlier. Wilson had said that to preserve its honor and freedom, the United States had no choice but to fight Germany. The autocratic German government recently had resumed its campaign of unrestricted submarine warfare, which Wilson characterized as an unprecedented evil in the history of civilized nations. Germany had plunged the world into a new dark age, he told the assembled lawmakers. The United States alone, Wilson believed, possessed the power and the moral idealism to bring the war to an honorable and just conclusion “for the ultimate peace of the world and for the liberation of its peoples.” In what would become the centerpiece of Allied propaganda about the purpose of the war, the President added, “The world must be made safe for democracy.” At the end of his thirty-six-minute-long speech, nearly everyone present stood and cheered, many patriotically
waving small American flags. La Follette

defiantly kept his seat and did not join in the applause.

La Follette’s turn to speak came two days later, in the Senate chamber. The leader of the anti-war faction in the Senate, he would take four hours to make his rebuttal to the President. After reading an anti-war letter from one of his supporters in North Dakota, he began his speech with a warning to the American people about a dangerous trend in the country. As a United States senator, he always had thought that the people deserved his best efforts to speak knowledgeably and honestly about the great issues of the day. Now a new trend could be seen in Washington: “standing back of the President without inquiring whether the President is right or wrong.” He judged it to be an ominous trend for the integrity of American politics.

La Follette thought the President not only wrong but deceptive in his war message. Future propagandists would find in Wilson’s speech an exemplary concoction for their craft. La Follette questioned Wilson’s sincerity in claiming the cause of democracy as the supreme end of America’s war policy. Some palpable facts contradicted the President’s claim. If democracy mattered so much to the United States government, why did we do nothing and say nothing about the plight of Ireland, Egypt, and India whose teeming millions languished in undemocratic servitude to our wartime ally, Great Britain? Nor had our other major allies—France, Italy, and Russia—covered themselves with glory by advancing the cause of democracy in their empires. As making the world safe for democracy could not in truth be presented as the real reason for our entering the war, it would behoove the American people to discover what actually had motivated our leaders to take this dread step.

A war of selfish ambition and cruel greed

To understand the real reasons for America’s involvement in the war, it would be necessary to determine the conflict’s origins in Europe. He guessed that at bottom the Europeans were in the process of wrecking their civilization because of commercial rivalries and imperialistic ambition. He told his fellow senators, “this war, like nearly all others, originated in the selfish ambition and cruel greed of a comparatively few men in each Government who saw the war as an opportunity for profit and power for themselves, and who were wholly indifferent to the awful suffering they knew that the war would bring the masses.” He made the right guess here. Later revelations about secret treaties and historical research in government archives would prove indisputably that the war had broken out in a context of imperialistic striving by all the major combatant nations for territories, markets, and resources.

About American motives for intervening in the slaughter-pen of Europe, La Follette could only raise questions and make suppositions. “Are we seizing upon the war to consolidate and extend an imperialistic policy?” he asked. It looked that way to him, especially in view of our alliance with Britain. He did not think of British imperialism, in the manner of so many Americans at that time and in the future, as a charming eccentricity of a brother democracy. He told the senators, “We are uniting with Great Britain, “an empire founded upon the conquests and subjugation of weaker nations.” It stood to reason that by our alliance with the British we would be implicated in their imperialist agenda. The economics of imperialism made it seem to La Follette as if the United States were engaging in a war to make the world safe for Wall Street, not democracy. From the first Wall Street-funded war loan to the Allies in 1915, La Follette had feared that our economic entanglements with the Allies would lead ineluctably to armed intervention. It turned out to be a legitimate fear. In its spectacular revelations of the 1930s, the Nye Committee would disclose the precise details of the financial arrangements—above all, the war loans—which had done much to bring America into the war.

Washington’s variously motivated Anglophile agenda had led to the double standards with which the American media and government had judged the wartime conduct of the two coalitions. The President appeared to be unaware of these differences. For example, he had described with horror Germany’s enormities in its unrestricted submarine warfare campaign, without thinking to mention Britain’s illegal naval blockade, which had resulted in appalling hardship and injury to German civilians. La Follette sought to flesh out the President’s excessively compressed analysis. He noted that American silence about Britain’s flagrant violations of international law had “helped to drive Germany into a corner, her back to the wall, to fight with what weapons she can lay her hands on to prevent the starving of her women and children, her old men and babes.” In the typical fashion of propagandists, the President mendaciously had omitted all the facts and conditions inconvenient for his argument. Half-truths, deceptions, and lies concealed the truth of why we were going to war.

Amos Pinchot, a progressive journalist friend to La Follette, sat in the press gallery that night and remembered: “At the end of his speech, tremendously moved and completely convinced of the immediate and ultimate wisdom of his vision, he stood in silence, tears running down his face.” Pinchot thought that he had the look of a despairing man, “like that of a person who had failed to keep his child from doing itself an irreparable harm.” He then sat down, slumped in his seat, and closed his eyes. Another journalist sitting with Pinchot, Gilson Gardner of the Scripps newspapers, leaned over to him and said, “This is the greatest speech we will either of us ever hear. It will not be answered because it is unanswerable.”

The greatness of La Follette’s 4 April 1917 speech consists partly of its effectiveness in exposing the obfuscations of President Wilson’s fateful war message, but also of its prophetic character. He foresaw that the war would have an imperialist outcome, no matter which side won. The Paris Peace Conference at the end of the war confirmed these forebodings, as the victors created a spoils-based international order that would lead to the outbreak of the Second World War twenty years later and prepare the ground for the manifold crises in the Middle East that afflict us today.

Lunging from illusion to illusion

Moreover, La Follette rightly sensed that intervention in the war would be an irreversible turning point for the United States, the decisive act of unleashing what William Appleman Williams would call the tragedy of American diplomacy. As the world’s only creditor nation in 1919, the United States became the chief funder and the linchpin of the postwar international order. America’s foreign policy would not be able to escape the gravitational pull of economic forces operating on a global scale. Endless wars would be in the country’s future.

We continue to live the tragedy of American diplomacy today, as our leaders lunge from illusion to illusion with no more idea than President Wilson had about the desolating costs of empire. La Follette thought that it would do no good in the long run to resort to the President’s politically soothing euphemisms to describe our empire. That these euphemisms, either in their original or updated forms, continue in use as the only way leading presidential candidates can talk about American foreign policy is a tribute to Wilson’s genius as a salesman. At the same time, the current political campaign reminds us of La Follette’s greater genius as a true leader. 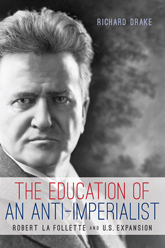 Richard Drake is professor of history at the University of Montana. He is the author of The Education of an Anti-Imperialist: Robert La Follette and U.S. Expansion; Apostles and Agitators:Italy’s Marxist Revolutionary Tradition; and The Aldo Moro Murder Case, among other works.

The Education of an Anti-Imperialist: Robert La Follette and U.S. Expansion (Studies in American Thought and Culture). University of Wisconsin Press, 2013.