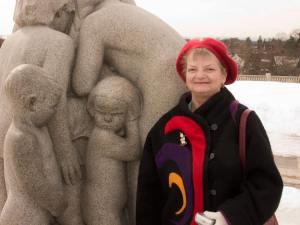 Mrs. Libkind, born in Racine, Wisconsin, operated a literary agency in Philadelphia, the Bookschlepper, representing university and academic publishers in the management of subsidiary rights. After graduation from Park High School in Racine, she earned a bachelor of arts degree in journalism in 1966 from the University of Wisconsin-Madison. She attended the university on a scholarship from Western Printing of Racine, the publishers of Golden Books, where her father was a staff artist. She also attended summer school at the University of Oslo, Norway. While at the University of Wisconsin, she was managing editor of the student newspaper, the Daily Cardinal. She also served as a board member of the Daily Cardinal Alumni Association.

Before starting her own agency, she was director of publishing operations for the Jewish Publication Society in Philadelphia, and before that worked as a marketing manager for the University of Pennsylvania Press, the University of Georgia Press, and the University of Wisconsin Press. She had also served as managing director of Worldwide Books in Ithaca, New York. Her professional affiliations included Women in Scholarly Publishing, of which she was a founding member, the Philadelphia Publishers Group, Women in Communications, and the Madison Press Club.

She was among the founders and later president of Friends of Eastern State Penitentiary Park, which improved the neglected property outside the walls of the historic prison in Philadelphia’s Fairmount neighborhood. While a resident of Madison, Wisconsin, she was president of seven after school day care centers. She was a member of the Unitarian-Universalist Fellowship of Athens, Georgia, and was until her recent illness active with the First Unitarian Church of Philadelphia, including its women’s book club.

She was preceded in death by her son, Eric David Spradling; her father, John B. Johnson; her mother, Jean Barr Johnson; and step-mother, Loretta Richards Johnson. She is survived by her husband, Robert L. Libkind, as well as aunts and cousins in Wisconsin, Alaska and Norway.

In lieu of flowers donations may be made to the American Heart Association.

Jean Sue has asked that the following be sent to all her friends in the event of her death:

Like a bird on a wire, like a drunk in a midnight choir, I have tried in my way to be free.

If I, if I’ve been unkind, I hope that you will just let it go by, and if I, if I have been untrue, I hope you know that it was not to you.

I saw a man, a beggar leaning on his crutch. He said to me, “Why do you ask for so much?” There was a woman, a woman leaning in a door, She said “Why not, why not, why not ask for more?’

Like a bird on a wire, like a drunk in a midnight choir, I have tried in my way to be free.

Here are some things you’ve heard me say; I call them “GienTsu-isms”—

With love and affection—Jean Sue